What is Tag Rugby?

Tag Rugby is an inclusive, minimal contact, shortened version of Rugby League, with up to seven players per side. All players are required to wear tag shorts with two ‘tags’ attached via Velcro, one on either side. Using rules adapted from Rugby League, attacking players dodge, evade and pass a rugby ball, while defenders attempt to prevent them scoring by “tagging” – pulling the Velcro-attached tag from – the ball carrier.

Similar to Rugby League, the attacking team has six plays – or tags – to score a try, or to take the ball down field as close to the line as possible before surrendering the ball on the sixth tag (‘turnover’). In mixed Tag Rugby, there are up to seven players on the pitch at all times with a minimum of three female players. Male tries are worth one point and female tries are worth two points. There are no conversions after a try.

Find out more detail on how to play in the Rules or FAQ sections. 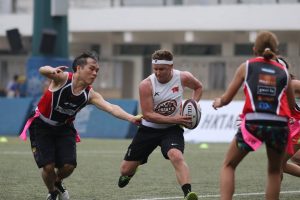 Find out how to get involved in tag rugby in Hong Kong.